The History of Fuerteventuras Sacred Mountain of Tindaya 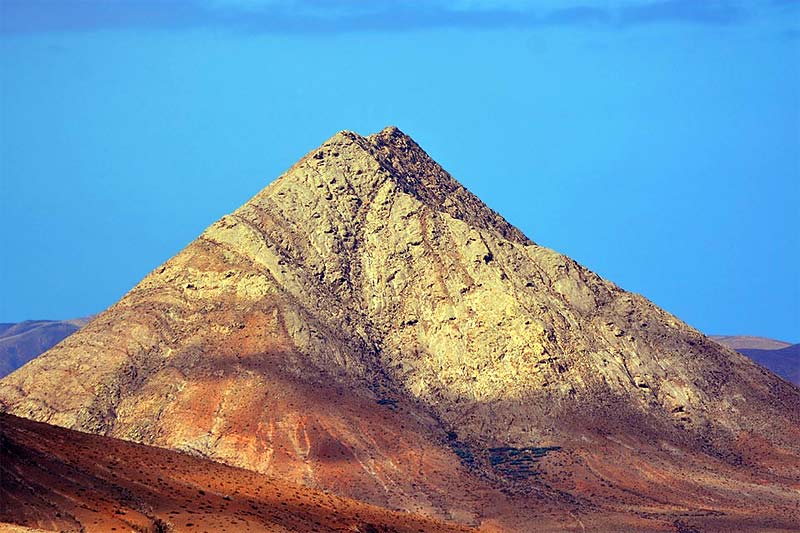 If you visit Fuerteventura on holiday, amongst the arid desert landscape you will see a mountain with some unusually striking characteristics in the northwest of the island. This is Tindaya, a local emblem rich in mysticism and with enormous archaeological value. Today, we tell you its story and invite you to visit using Payless, your rental car in Fuerteventura.

Tindaya is near to the municipality of La Olivia. There, the islands most famous mountain rises from between brown and ochre plains. It is an emblem of Canarian culture, still remaining shrouded by an aura of mystery and symbolism even today. It bears more than 300 foot-shaped rock carvings, undoubtably demonstrating the significance the mountain held for the ancient aboriginals. The meaning of the carvings remains uncertain, but it has been verified that all of the engravings orientate towards the Teide volcano in Tenerife, and the island of Gran Canaria. This type of podomorphic engraving is only found in Fuerteventura, Lanzarote, and areas of Africa that were home to Berber tribes.

For all this, Tindaya has been classified as a heritage site of cultural interest (Bien de Interés Cultural). However, the site is not without controversy. In 1993 Eduardo Chillida, a Basque artist, proposed a sculptural work on the mountain that would have a hollow interior. The proposal faced opposition from ecologists, historians, archaeologists, and a majority of the general public, as the need to carve a hollow chamber from the mountain was seen to increase the risk of Tindayas collapse.

Tindayas 400-metre height amazes travellers approaching its surroundings. So, if you are considering a vacation here, dont forget to book your cheap rental car with Payless at the Fuerteventura airport so you can reach this magnificent natural wonder. Additionally, you could continue your tour by visiting one of the nearby tourist destinations, such as El Cotillo or Corralejo.

Remember that with Payless, your rental car in Fuerteventura, there are many advantages that will perfect your vacation. Confirm your reservation now, and dont miss the chance to visit the most important natural wonder of the island!

Back
We use our own and third-party cookies to improve the user experience, obtain statistical information on browsing habits and offer advertising adapted to your preferences. You can change or deny this option in our cookies policy. Accept